One of the best things about London (I might have mentioned this before), is its amazing museums.  Another great thing about London is that most of these amazing museums are free, which makes it easy to them visit again and again.  This is especially advantageous with the British Museum, as its vast collections—from present day to prehistory—are just too intense to take in on one visit alone.

The British Museum was first established in 1753, which makes it one of oldest national public museums in the world.  It has undergone several expansions over the years to accommodate new collections and acquisitions as well as the 6 million visitors it welcomes annually. To walk through this museum is like taking a walk through history.  It’s that special…

The central area of the museum is the Great Court—Europe’s largest covered square.  This area was once the museum’s open-air courtyard but the two-acre space was transformed and reopened in 2000 as Queen Elizabeth II Great Court, complete with an impressive glass ceiling.

During our visit, Kevin and I decided to harness our energy on the ground floor, which also happens to be where the most popular sections of the museum are located.  This floor contains Egyptian, Assyrian and ancient Greek collections and artifacts as well as the Enlightenment Gallery. 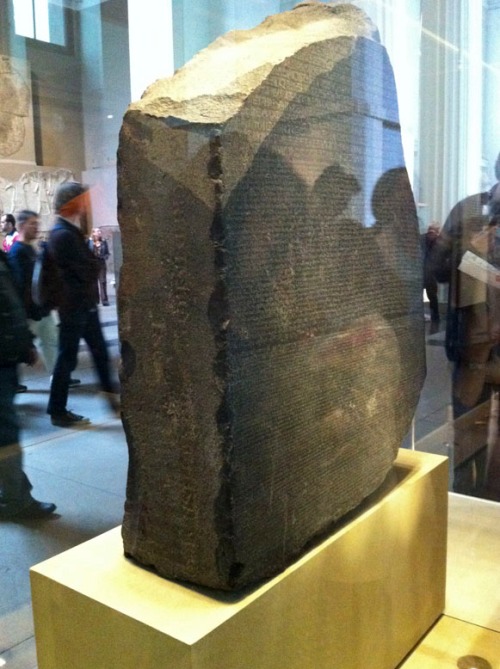 One of the most popular “treasures” in the British Museum is the Rosetta Stone—the key to deciphering Egyptian hieroglyphs.  (I’m not a big fan of taking photographs in museums but I’m also not a big fan of picture-less blog posts, so you can understand my conundrum.  I did, however, manage to take a shot of this beauty…so very cool.)

Near the Rosetta Stone is the colossal granite statue of Rameses II, the 13th Century Egyptian monarch, along with an extraordinary array of fascinating Egyptian sculpture and artifacts.  We made a pass through the Egyptian Death and Afterlife Gallery as well, for a look at mummies.  Fascinating stuff.

Another popular sight in the museum is the ‘Elgin Marbles’—a collection of sculptures and various pieces of architecture from the Parthenon in Athens brought to England by Lord Elgin.  It was amazing to be eye level with these powerful pieces from this great Athenian temple.

We also wandered through the Enlightenment Gallery.  Here you will find a diverse exhibition of objects from this period.  One object of interest is The Sloane Astrolabe—an astrolabe is a complex instrument used to locate the positions of planets and stars, to tell time and even your horoscope, among many other things.  This particular astrolabe is large and very beautiful and is one of the oldest European astrolabes, made in England around AD 1300.

We enjoyed our visit to the British Museum and look forward to learning more about the other galleries at a later date.

*Be sure to rent an audio guide, it’s one of the best!

London is in bloom!

…so K and I decided to wander around Kensington Gardens to enjoy the fresh air, the vibrant colors and the extra hour of daylight.

Tiptoeing through the tulips

Once part of Hyde Park, Kensington Gardens became the private gardens to Kensington Palace in the late 1600s.  Over time, the Gardens opened to the public and the 275 acres have become a popular retreat for many Londoners and visitors alike.  The avenues of trees, abundant flower beds and the serene surroundings offer the same relaxing vibe as the other wonderful green spaces in this city do (see Hyde Park, Hampstead Heath and Battersea Park).  It’s a great place to just be.

Some of the Gardens’s attractions include:

Physical Energy Statue:  One of George Frederick Watt’s most famous and ambitious sculptures.  Watts described it as, “a symbol of that restless physical impulse to seek the still unachieved in the domain of material things.” 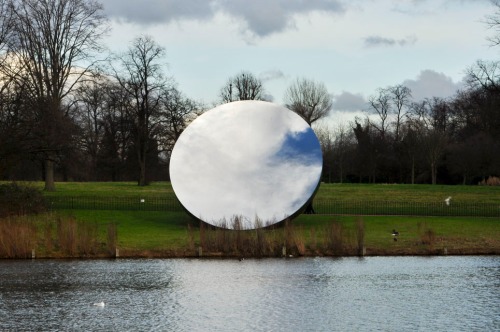 Sky Mirror:  Sculpture, Anish Kapoor, has several of his stainless steel works on display throughout the park—offering a strong contrast to the natural world that surrounds them.

Prince Albert Memorial:  (Husband of Queen Victoria)  The memorial symbolizes the Prince’s passions and interests, especially in the arts.  It is known as one of London’s most ornate monuments.

The Italian Gardens:  As Prince Albert’s brainchild, these elaborate water gardens were created in 1860-1.

Kensington Palace:  Located on the western edge of the Gardens, the palace was home to Princess Diana and several monarchs throughout the years.  The palace still functions as a royal residence but also welcomes visitors to tour its many rooms.

Kensington Gardens provided the perfect place for us to ring in the new season…finally, it’s spring.

Over the weekend, we ventured to the Hampstead area of London, which is part of the borough of Camden.  Hampstead boasts a charming, village-like atmosphere with narrow streets and specialty shops.  It is an attractive residential area to live in and one of the most expensive areas to buy a home in.  The town houses and mansion blocks are neat and tidy and perfectly manicured. Hampstead is also home to the grand, hilly, open space called Hampstead Heath, or simply, “the Heath”.

In the 18th Century, Hampstead was known for its therapeutic spa water which was sold to Londoners and visitors alike.  The fountain, pictured above, marks the site of the well that once provided this rich chalybeate water.

We stopped for lunch at The Wells Tavern—a fantastic pub & restaurant.  It is said that The Wells Tavern was once an inn that accommodated those who engaged in “forbidden acts”, however, the staff could not confirm if this was true or not (but what a good story, eh?).  Nevertheless, it’s a lively space in an otherwise quiet neighborhood.

View from the Heath

The Heath is one of the highest points in London and has some of the best views of the city.  It covers about 790 acres and includes several ponds which makes it a popular place to run, walk, swim and retreat from city life.  It is rustic and natural and our favorite park in the city because of this.  We walked to the top of Parliament Hill to enjoy the broad view of London, even though the cloudy sky concealed a good part of it.

We had a fun day roaming around Hampstead & the Heath and will return in  the summer as Kevin would like to do some swimming with the ducks.  : )

P.S.
Hmmm.  What exactly does a butcher do?

After seeing The King’s Speech last weekend, it only seemed appropriate to visit Windsor Castle.  After all, the film takes place around World War II and the royal family spent most of their time at the Castle during the war.

Windsor Castle is the world’s largest occupied castle, as it covers over 13 acres and contains about 1,000 rooms.  The Castle was first established by William the Conqueror in 1070 when he built a motte and bailey, but since that time it has grown significantly.  The Castle is one of Queen Elizabeth II and Prince Philip’s Royal Residences.  The royal standard (flag) flies high above the Castle when the Queen is in residence (see photo above).  She was there on Sunday, but, sadly, we were not invited to join her for tea.

Due to the photography restrictions inside the Castle, I am unable offer you my usual show-and-tell, but here’s the rundown of what we saw:

We first toured the Drawings Gallery where the current exhibition is “Prince Philip: Celebrating 90 years.”  The 90th birthday of Prince Philip is on 10 June 2011 and this special exhibition of photographs, memorabilia, gifts, paintings, etc. reflects his life and interests.  Some of the gifts the Prince has received from various Heads of State over the years are rather amusing, to say the least.

Next, we viewed Queen Mary’s Dolls’ House.  This miniature life-like dolls’ house, which replicates many rooms and details in Windsor Castle, was built for Queen Mary between 1921 and 1924.  Each room is fully furnished complete with running water, electricity and working lifts.  It is a spectacular piece of work.

We then toured the State Apartments and the Semi-State Chambers (George IV’s private apartments) impeccably decorated with beautiful tapestries, antiques, and paintings from the Royal Collection, including some works from artists such as Rembrandt, Rubens and Canaletto.

One of the very long (185 feet long) rooms in the castle is St. George’s Hall.  This hall, traditionally used for State Banquets, can accommodate a table that seats 160.  (Can you imagine!)  The wood beam ceiling adorned with shields are coats of arms from the Order of the Garter Knights.  The shields covered in white indicate a Knight disgraced by misconduct but remain in the hall for all to see.

One tidbit we found interesting was that the Queen holds “dine-and-sleeps” during Easter time where guests arrive for dinner, stay overnight and then depart after breakfast.  (Kevin and I are working hard to get invited to one of these.)

Unfortunately, we did not get to see the castle gardens, St. George’s Chapel, and various other areas due to rain earlier in the day and places being closed on Sundays, so there will be a part-two to Windsor Castle.