The Tower of London has served several purposes throughout its vast history on the north bank of the River Thames.  We recently visited the Tower with Kevin’s parents, while they were spending some time with us in LondonTown.

The Tower of London was established as a fortress around the 1070s by William the Conqueror.  Throughout its history it has also served as a royal residence, a prison as well as an execution site.  Today, the Tower is one of London’s most popular tourist attractions, primarily because it is home to the spectacular Crown Jewels.

The Crown Jewels consist of the crowns, robes, scepters, orbs, swords, ornaments and clothing used during coronations and other state occasions.  The beautiful diamonds, jewels, gems and gold dazzle—especially the Imperial State Crown that has over 2,800 diamonds!  This massive collection isn’t even insured as they could never be replaced.  (I would have loved to take photos here but photography is not allowed.)

Another highlight of the Tower of London is the exhibition of royal armor—over five hundred years worth.  The variety of armor and weaponry make for a grand display.  It was interesting to see the different shapes and sizes of the suits of armor for previous kings—especially Henry VIII who found it necessary to protect his “vital assets” with a bit more metal…

We took a guided tour with a Yeoman Warder, or “Beefeater” as they are nicknamed.  The Tower of London is home to the Warders, as they actually live inside the outer walls of the Tower’s grounds.  The Warder’s official role is to guard the Tower and the precious Crown Jewels.  Our “Beefeater” was highly entertaining and wonderfully witty. 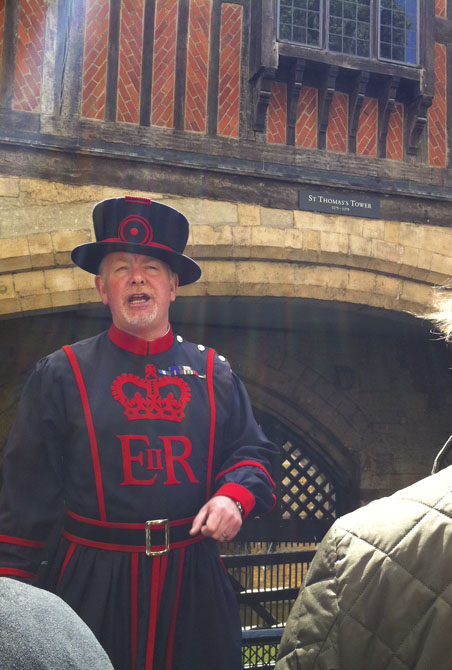 It was a fun experience to learn a bit more about this historic city.

This entry was posted in The Sights and tagged Crown Jewels, Tower of London. Bookmark the permalink.