View of Barcelona from Montjuïc Castle

Our next stop in Spain was Barcelona, the capital of the Catalonia region and its second largest city, after Madrid.  Barcelona is a captivating place—its European charm, urban style, diverse art & architecture and Mediterranean climate, make it a unique city to visit.

We began our Barcelona tour strolling down La Ramblas—one of Spain’s most famous streets.  La Ramblas is a wide, pedestrian boulevard lined with restaurants, shops and people.  It is a main tourist attraction and people-watching spot and one of those things you have to see, even if you only walk down La Ramblas once.

The massive Boquería Market, also known as St. Josep Market, is located midway down La Ramblas.  Opened in 1840, this lively marketplace is one of the city’s oldest and sells just about everything.  It is a top market for some of the city’s best chefs. We can see why… 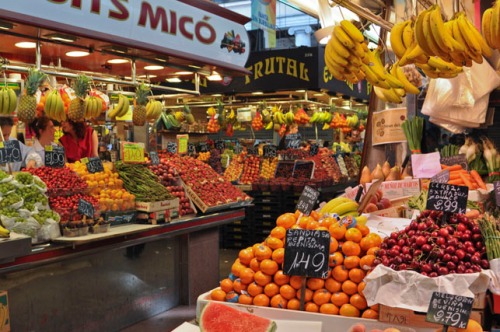 Way too many choices!

Close by the Boquería Market, is a very special piece of pavement.  If you are not paying attention or if too many people are walking about, you can miss the Miró Mosaïc (Mosaïc de Miró).  Joan Miró, one of the greatest Catalan artists, made the city of Barcelona this colorful, bold mural.  Very cool.

The 200 foot tall Christopher Columbus Monument stands at the end of La Ramblas on the seafront.  Its location marks the site where Columbus returned to Spain after his first journey to America.  Thanks, Chris!

Kevin and I also spent some time wandering around the Barri Gòtic, or Gothic Quarter.  Its web of narrow, winding streets and fascinating, medieval architecture is teeming with cafes, restaurants, shops and musicians.  This area completely engaged our senses. 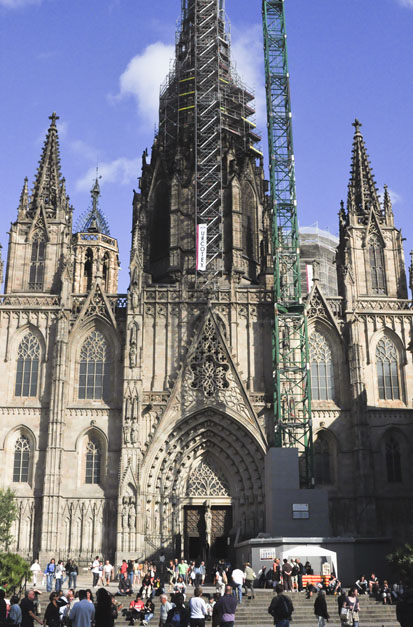 Within the Barri Gòtic, on Plaça de la Seu, is the Barcelona Cathedral.  Most of the construction on this massive, Gothic style cathedral took place in the 14th century.  Its spacious, open interior and ornately carved chapels is worth a visit.  The façade is currently undergoing a major restoration.

Also in the Barri Gòtic is Barcelona’s most popular museum—the Museu Picasso (Picasso Museum).  This museum is housed within several medieval mansions on the narrow street of Carrer de Montcada.  The collection mainly includes works from Picasso’s formative years (which he spent in Barcelona) as well as specific pieces from his later years.  It is a fascinating look into this world-famous Spanish artist’s genius.  We are huge fans!

Stepping away from the Barri Gòtic, we spent one day on Montjuïc (“Mount of the Jews”).  This broad hill, overlooking the city and its port, is home to museums, gardens, a castle and the main sites of the 1992 Olympics. 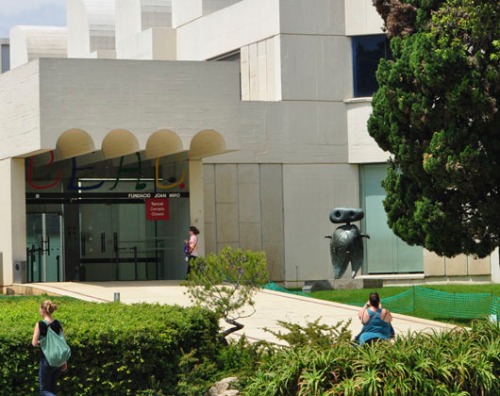 On Montjuïc, we visited the Joan Miró Museum (Fundació Joan Miró).  The museum features the greatest collection of paintings, sculptures, textiles and drawings from this renowned Catalan artist.  It’s an amazing look into the abstract world of Miro’s creative brilliance.  If you like his work, it is a must-see! 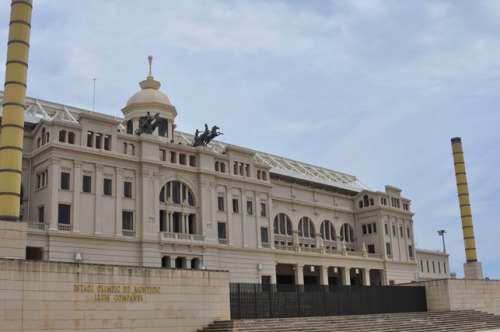 Montjuïc was the main site of the 1992 Olympic Games.  The Olympic Stadium (Estadi Olímpic) was redesigned from an earlier version that opened in 1929.  For all USA Basketball fans, this was the year of the “Dream Team”—Bird, Barkley, Johnson, Jordan and Ewing.  Wow. 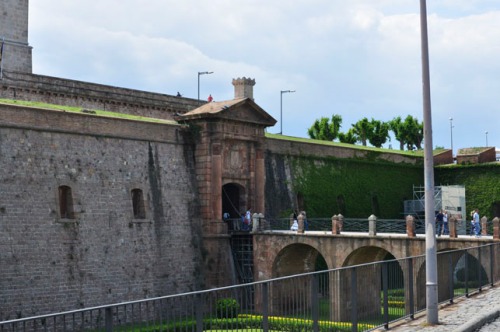 In the 18th century, the Spanish government built Montjuïc Castle to watch over the city.   Over the years, it also served as a political prison and execution site. Today, the castle is home to a military museum and the grounds offer spectacular panoramic views of Barcelona and its port (photo at top of post).

Another museum we visited on Montjuïc was the National Art Museum of Catalonia (Museo Nacional d’Art de Catalunya).  This museum features Catalan art through the centuries, as well as its acclaimed collection of Romanesque mural paintings.

A Beach in Barceloneta

Down from the hill of Montjuïc, we toured Port Vell and La Barceloneta.  This area on the coastline was dramatically redeveloped for the 1992 Olympic Games bringing parks, residential buildings and a conference center to an otherwise forgotten part of the city.  Its home to great seafood (we hear the best paella), sandy beaches and a long promenade—a perfect place to escape from the bustling city and a great place to end this memorable trip.

Whew! We saw a lot in Barcelona, but it’s not over yet…
Part II will cover Antoni Gaudi, as his work deserves its own space.

One response to “Barcelona, Spain”